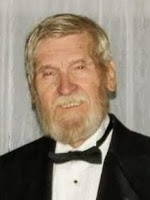 Donald “Reverend Don” Lautzenheiser, 92, of Berlin Heights, entered into heaven March 19, 2020, to be reunited with the love of his life; his beautiful wife, Deloris (Ankeny) of 65 years.

He was a minister in the United Methodist Church and was active in community service organizations at each new charge. Upon his retirement he enjoyed working as millwright at the Berlin Fruit Box Company for several years. He was an Army Veteran serving in WWII, a member of the American Legion, and a member of the East Townsend Chapter of the Masonic Lodge.

He loved life and had many talents and interests. He was an avid steam enthusiast and built his own steam engine. He used his woodworking skills to build cradles for his grandchildren as well as toy trucks. He spent many years as a member of a Civil War reenacting unit. His favorite time of year was Christmas and he took great joy in telling Christmas stories at church during the Advent season.

He will be eternally missed by his children, Ernest (Stephanie) of Kensington, Linda (Robert) Scott of Urichsville, Wilbur (Lena) of Bucyrus, Jeanette (Randal) Liles of Bucyrus, David (Doralie) of Salem, Yvonne (John) McMillin of Hartsgrove, and Martha Blaich of Medina, and many grandchildren and great-grandchildren.

He was preceded in death by his parents, DeWitt and Evelyn (Hague); and his brothers, Walter and Harold.

A memorial service will be planned at a later date. Condolences may be left at www.mormanfuneralhome.com

Memorial contributions may be made to your local church or Masonic Lodge to continue his work to the Glory of God.

To order memorial trees or send flowers to the family in memory of Donald Lautzenheiser, please visit our flower store.