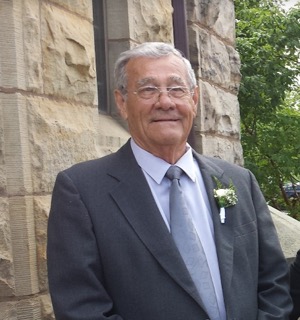 Donald A. Starbuck, 86, of Wakeman, passed away on June 18th at Stein Hospice Care Center in Sandusky, after a short illness. He was born on June 1, 1934 in Kenton, to Howard Arthur and Mabel (Dodds) Starbuck.

He was a 1953 graduate of Amherst High School. Upon graduation, he proudly served in the United States Marine Corps for three years. He worked many years for his brother, Bill, who owned and operated Star Builders. Don was a talented carpenter and could build just about anything.

He was a member of the Wakeman Fraternal Order of Eagles. He enjoyed the outdoors and nature, animals, fishing and boating on Lake Erie, gardening, and spending time with his family and friends. He was a sports fan and especially liked the Cleveland Indians, Cleveland Cavaliers, and Cleveland Browns and Ohio State football.

He is survived by his children Deborah Starbuck of Wakeman, Kathleen “Kitsy” (Steve) Noftz of Huron, and Donald A. (Jane) Starbuck, Jr., of Graytown, three grandchildren, Ryan (Elizabeth) Noftz, Amanda (Luke) Kromer, and Andrea Meinhold, seven great-grandchildren, his brothers, Marvin Starbuck and Dale Starbuck, both of Amherst, and David Starbuck of California.

Friends may call Monday, June 22, from 4pm-7pm at the Morman Funeral Home, 16 Cooper Street, Wakeman. Funeral services will be held on Tuesday, June 23 at 11am at the funeral home. Burial will take place at a later date at St. Mary’s Catholic Church Cemetery in Wakeman.

Condolences may be left at www.mormanfuneralhome.com. The family suggests that memorial contributions be made to the Huron County Humane Society, 246 Woodlawn Ave., Norwalk, Ohio 44857 or Stein Hospice, 1200 Sycamore Line, Sandusky, Ohio 44870.

To order memorial trees or send flowers to the family in memory of Donald Starbuck, please visit our flower store.