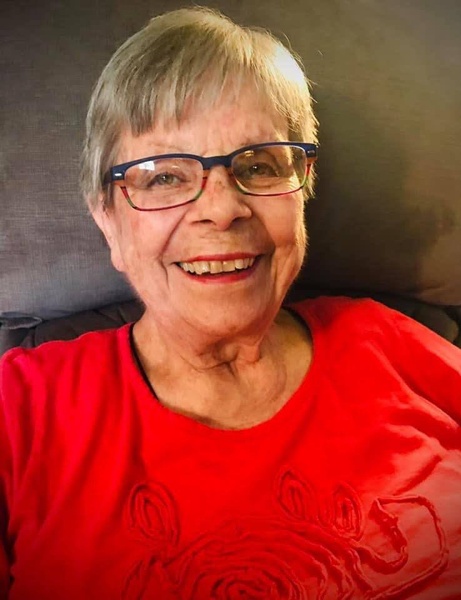 On Monday, February 15, 2021, Gatha Baker, devoted mother and grandmother, passed away at the age of 84. Gatha was born on March 27, 1936, in Wayne County, Kentucky to Floyd and Flonnie (nee Coffey) Slagle. On October 3, 1952, she married Glen F. Baker. They raised a daughter Glendola (Dodie) and son Timmy Lee. Together the family moved from Kentucky to Kipton, Ohio in the 1950s and Gatha remained in their family home there until her death.

Gatha was a member and diaconate of the Kipton Community Church, staying involved and active until her senior years. She retired from the Firelands School District and served on the Camden Fire Ladies Auxiliary.

Despite suffering from dementia and the havoc wreaked on her mind and body, her family was able to care for her at home until just before her death. Gatha survived her life’s trials with a tenacious spirit and a supportive family. Her hobbies included fishing, crocheting, quilting, puzzles, card games, gardening, and frying a mean bologna sandwich. She made the best banana pudding and her macaroni salad is arguably her life’s greatest achievement. She was an honest and blunt woman who never left you wondering how she felt about something. She was a competitive soul who taught each of her grandkids how to win at cards, dominoes, or checkers with flare. And, it remains unknown if she was cheating at Crazy 8s.

She was preceded in death by her parents, her husband Glen Baker, brothers Ken and Bobby Slagle, sisters Estine Hurt, Elnore Thompson, and Norma Lyons, as well as two infant siblings, an infant of her own, and great granddaughter Maranda Faith. She leaves behind sisters Kaye Lyons of Indiana, Sue Carter and Mary Thornton both of Kentucky, as well as daughter Dodie Zickefoose (Walter) of Wakeman, and son Tim Baker (Beverly) of Kipton. She also leaves her grandchildren: Amanda Brand (David) of New Philadelphia, Bobbie Kozak (Joe) of Elyria, Jennifer Seeley (Charles) of Wellington, Mariah Deitz (Brian) of Amherst, and TJ Baker (Heather) of Kipton. Gatha was also blessed with seven great granddaughters (Brooke, Cheyenne, Taylor, Hailee, Savannah, Scarlett, and Ainsley) and one great grandson (Hayden) who will miss her fiery personality. Gatha also leaves behind a number of nieces and nephews.

Funeral services will not be held at this time. Arrangements by Morman Funeral Home in Wakeman. Online condolences can be made at mormanfuneralhome.com. In lieu of flowers, the family is asking for donations to be made to Kipton Community Church.

To order memorial trees or send flowers to the family in memory of Gatha Baker, please visit our flower store.